FROM SLEEPING UNDER A TREE TO CHURNING BILLIONS

Senzo Tsabedze is not a name that rings a bell to most people outside the transport industry. In fact, when one searches for his name on the internet, top of the list is a recent controversy that involved his company Afrirent bagging a billion rand fleet contract with the Johannesburg metro.

However, the Mpumalanga-born businessman seems to have earned a reputation as a trailblazing disruptor and during the interview with City Press the reason for such a perception became clear.

Born in Mshayazafe village in the Albert Luthuli Local Municipality, Tsabedze is the fourth of eight siblings and knew from a young age that his family was poorer than others in the community. His father, the sole breadwinner, worked at the nearby Msauli Asbestos Mine.

Tsabedze started school at Sithuthukile Primary and progressed to Ekulindeni High School, however, the bleak financial situation at home and the prospect of working at the mines forced him to run away with a friend to the friend’s relative near Nelspruit after completing Grade 12.

He was not a typical rural child and never played soccer, although he admits to trying, but says he was not good at it.

“I preferred to spend time being a caddy at the mine’s golf course or picking up rubbish at the mine for a small fee. Besides, my brother was good at soccer so I was always compared with him,” he said, reminiscing with a slight laugh at how he fell in love with golf.

“After matric I ran away from home because I was scared of working underground,” he said, adding that running away to Matsulu seemed like a significant turning point in his life.

“I didn’t tell anyone at home where I was going. My parents used to drink a lot, so this thing of worrying about where is my child, it was not really there,” he said.

In Nelspruit, he went door-to-door and got a job in a Chinese restaurant, washing dishes and cleaning the kitchen.

Being hired on the spot for R15 a day and knocking off after midnight, he had neither a place to sleep nor enough money for transport.

“I would knock off around midnight to sleep under a big tree near Rob Ferreira Hospital. The manager asked why I didn’t change my clothes and I told her, and lucky for me she offered her garage, gave me a box to sleep on and a blanket, and I would wash in the maid’s quarters. I stayed there for two months and moved to a one-room shack in Pienaar, about 45km away,” he said.

His new place was not safe, as every pay day there would be robbers waiting for commuters near the bus stop.

“We got paid in cash, so they would rob us and if you did not have cash they would beat you,” he said.

With the duty of sending money home regularly and having to fit robbers in his budget, he opted to move three months later to a friend’s family in KaNyamazane, a township closer to town.

After a year at the Chinese restaurant, he got a job at a newly opened mall as a waiter in an Italian restaurant, before moving again to be an assistant food and beverage manager at a five-star hotel in Sabie.

“They took me to training in Stellenbosch and it exposed me to all sorts of things – from different types of wines, and food pairing to cutlery,” he said of the job that he kept for only two years, before joining a company that ran restaurants within the Kruger National Park as an operations manager in 1999.

It was while he was there and staying within the park that he got his first business break to provide linen for the hotels.

“I was teaching one of the guys at SA National Parks how to play golf and he told me about the opportunity. They were always looking for black people to provide services, but few companies submitted competitive bids.”

The development prompted him to register his first company, Siyenza Consulting, under which he bagged a three-year contract.

He resigned from his job to be hands-on at his company and has never looked back.

His next break was when someone who had a contract to build a few classrooms at a local school but could not finish the job offered him the contract for R150 000.

“Those days you could buy the contract, so I bought the contract and sold it to a construction company for about R500 000 as it was,” he said.

With the R350 000 profit for not doing much, he started searching for similar deals of contractors who could not finish their contracts owing to cash constraints.

Seeing the profit margins of renting out trucks, Tsabedze kept adding to his fleet until he had nine trucks rented out.

While Siyenza died a natural death, the savvy entrepreneur registered a fleet management company and got his first government contract at Bushbuckridge Local Municipality for fleet management worth around R37 million.

However, with no guarantees to put forward for a bank loan, he had to partner with a big dealership group in Mpumalanga to implement that project.

With the lessons and money gained from that contract, Tsabedze went solo and bagged more similar contracts.

Afrirent Holdings also has a financial services company that deals with insurance, a fuel supply company, a tracking company, a waste management company as well as a hotel management

Tsabedze said although he values hard work as a key ingredient for success, it is only a third of the overall recipe.

“I would say it’s 30% hard work and 70% God because I am a religious person. Otherwise how do you explain going from sleeping on the street to being where I am right now?” he asked.

Top of the list of things that motivate him are his employees and the duty he owes to them and their families.

He feels that the business needs to be less dependent on revenue from government contracts.

“We are too reliant on tenders, so right now we are trying to lower that. If we can get it to be 50/50 that will be okay because right now the majority of our revenue comes from tenders,” he said.

Tsabedze said the biggest lesson he has learnt in business is that honesty is key. 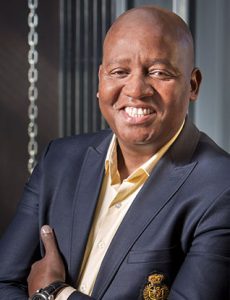 Senzo Tsabedze thinks there is something amiss about the timing and development that led to the controversy around his company.

Afrirent was accused of allegedly bagging a R1.2 billion contract with the City of Johannesburg and paying a relative of EFF leader Julius Malema for Malema’s influence, an allegation both parties denied.

Tsabedze said Malema’s relative happened to be a service provider for one of Afrirent’s contracts with the department of agriculture.

“I cannot be expected to ask all our service providers if they are related to politicians or not, I have more than 70 suppliers. Worse if their surnames are not the same,” he said.

The damage has been unpleasant and Tsabedze says he even had to explain the issue to banks.

“The contract in question is a R56 million a month contract and it has never been done by a black company, so we touched a nerve. We disrupted the status quo.”

He said one of the losing bidders went as far as offering the metro half the price of the deal, in an effort to undercut Afrirent so that it would lose out on the tender.

He also said the bad publicity only came after he refused to be subcontracted or enter into a joint venture with a competing major fleet company.

“When I refused to work together with them, because we have capacity and we have been doing this for 15 years, I became enemy number one.